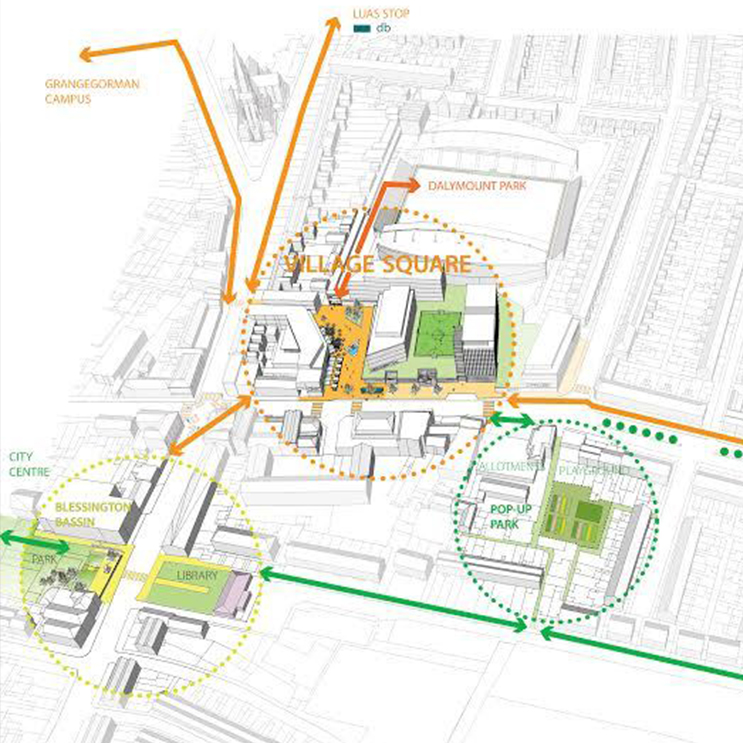 PHIBSBOROUGH IS A BUSY, busy area, with a strong sense of community.

But for years it has been lacking amenities that those who live there say would make life so much easier for them.

Now determined locals have joined forces to create a plan to make life better for everyone in Phibsborough.

“It has really been seven years in the making,” said Marian Fitzpatrick, one of the organisers of the group Phizzfest Reimagining Phibsborough, which came out of the annual Phizzfest arts festival.

It was set up as a direct response to the shelving of the local area plan (LAP) for the area. Locals looked at the situation in Phibsborough and realised “the one thing we have going here is our social capital”, said Fitzpatrick.

We want our village back – we want a living village, not just a place that people from Longford and Cavan can drive through at speed.

The festival helped reinvigorate the area’s arts community – despite the lack of a community space, let alone an art space. Then a 2014 project by local artist Dorothy Smith called Put Yourself in The Picture asked people to visualise what areas they would like to see transformed in Phibsborough.

Out of that came Remagining Phibsborough, which has now held a design review in association with the Royal Institute of Architects in Ireland (RIAI).

That project has reached its final stage – phase three – with the completed designs from seven experts (architects, urban designers, planners and transport experts) being shown at a public meeting. The local Byrne family are one of the private sponsors of the initiative.

Proposals that came out of the process include:

Other proposals look at better use of green spaces, lanes and vacant spaces; and amenities for children and older people.

A process of discovery

Part of the review involved design analytics, where the locals “found out things we didn’t know before”, said Fitzpatrick.

“We found out Phibsborough had the lowest car ownership in the country, yet we are besieged by traffic in a daily basis,” she said. “Traffic is the thing that stops you feeling safe in your own village. We started the campaign because you can’t cross the road in Phibsborough.”

Part of the review also asked people what they would like to be able to buy in Phibsborough – there’s no butcher’s there, said Fitzpatrick, and you’ve to go into Dublin city if you want to buy a book or a pair of tights.

But there were things that came out of [the suggestions] and the overwhelming one was just to be able to feel safe.

People aren’t looking for Olympic swimming pools – they’re looking for a place where they can sit and talk to a friend. The opening of a small number of new businesses – a coffee shop, a gastropub – has helped to give a new boost to the area.

All of that information is being fed back to the new owners of Phibsborough shopping centre, which like Dalymount Park (owned by Dublin City Council) is scheduled to be improved.

Ralph Bingham, who is part of the design review, is with MOLA Architecture and lives in Phibsborough.

He loves Phibsborough. “There’s great community spirit, really good residential housing stock, some very good streets, very good communities, but it’s really let down by the public realm. It’s been sacrificed. The village itself has been sacrificed by the fact two major roads intersect there.”

Pedestrians in particular find Doyle’s corner bad. “It splits the community in four because people find it difficult to cross,” said Bingham. “If you look at the crossroads the two major buildings on the crossroads are derelict. They are fine architectural buildings but nobody seems to be able to make it commercially viable because there is not free-flowing pedestrian movement at the junction.”

Noise pollution, air pollution and the dangerous nature of traffic in the area make it a very difficult and hostile environment for the public realm. I think businesses find it hard to survive in the area. And most of the people in my area they shop in Cabra or shop in Fingal.

The next steps for Reimagining Phibsborough involve lobbying councillors on the issue, and continuing to meet with Dublin City Council and other vested interests.

There is now a local environment improvement plan (LEIP) for the area, which is in draft format. “We are hoping that some of the ideas that have been generated in the design review process can be incorporated into the LEIP,” said Bingham.

“There is a fairly strong movement there and it’s not going to go away, so it’s hopefully something that will be taken seriously.”

In addition, two academics involved with the design review have agreed to set up a two-year programme with UCD architecture students. This will involve a detailed analysis of the Phibsborough area, with the students then working on projects to tackle issues.

“We are quite excited about that because that will mean that things can be active for the next two years,” said Bingham.

Fitzpatrick is similarly hopeful that the groups’s ideas will be taken on board by the council and developers of the shopping centre.

She noted that with new businesses opening in the area, and momentum behind this design review, things are improving. “I can really sense that Phibsborough is on the up,” she said.